Hello fellow families of marvelous children who have a diagnosis of cortical visual impairment!

On Saturday, April 28th, Perkins School for the Blind held its 35th annual Early Connections Conference.  The all day event offered “parents and professionals throughout New England” the opportunity “to network, share ideas and strategies for helping children with visual impairment from birth to age 7.”  (www.perkins.org)

Image:  A poster for the Early Connections Conference

I had the pleasure of attending the conference this year.  According to Perkins’ Director of Community Programs and Conference Chair, Teri Turgeon, this year’s attendance totaled 106 parents and 38 professionals (including teachers of the visually impaired, speech therapists, and occupational therapists).

Even though my daughter is almost 12-years-old, I still have a lot to learn.  I found it hard to choose between the variety of presentation topics from the Expanded Core Curriculum to Issues with Complexity in CVI to What about the Dads?  From Has your child had a low vision evaluation? to CVI: Assessment, strategies, and implementation across the day to Strategies and resources to support children who are deafblind. And more!

(I went with Expanded Core Curriculum and CVI Complexity as these are two important pieces of the ongoing development of Eliza’s IEP and, really, her life.)

Historically, Perkins has been and continues to be the leader in educating children with ocular and cortical visual impairments.  With the Early Connections Conference, Perkins is a leader in supporting the families as well.

It was a warm and sunny Saturday in Boston.   The lawns on Perkins campus were green with new growth thanks to rain the day before.  Outside the Lower School Building, picnic tables and a bouncy house had been set up.  Inside, Perkins staff and volunteers were ready to hand attendees their welcome bags and help parents get their children involved in the day’s activities.  Vendors (including the Pediatric Cortical Visual Impairment Society) displayed information and products in the school auditorium where parents and professionals could browse while helping themselves to a continental breakfast.  (Well played, Perkins.  I have never met a bagel I couldn’t learn to love.)

Tables set up in the Perkins auditorium.  The PCVI conference materials, a display with children’s faces and a table with a black tablecloth and a white drape with the PCVI logo over it.  A group of people stand at the table to the right speaking to another vendor.

Ed Bosso, the Superintendent of Perkins School for the Blind, and Teri Turgeon welcomed the families.  Ed shared that, despite a long career in special education, becoming the parent of a child with a visual impairment was a challenge for him.  He found comfort and information at a previous Early Connections Conference.  For him, attending the conference and meeting other families, meant you will “never feel alone again.”

Teri Turgeon (also the parent of a young adult with a visual impairment) told the attendees that she hoped the conference helped them “fill their cups.”  She explained that there are experiences in your life that are intersections and the choices you make can change the direction of your life.  She hoped that the conference would be an intersection for families to move forward.

Image:  A drawing of the words “We’ve Got This” held up by a group of women.  One woman holds a baby.  Another baby sits on top of the words holding a rattle in his raised hand.

Thanks to illustrator extraordinaire, Ian Christy for this fun take on the conference theme

The educational aspect of this conference was a big draw for me, but, what made my heart happy was seeing all of the children. A little girl in a pink t-shirt and holding a white cane expertly navigated in and out of a crowded elevator. Volunteers in red t-shirts took children for walks and painted faces.  In one room, a table of little girls, all bright colors, elbows, and ponytails, drew pictures while a grinning little boy tossed a ball with a teenager, or, rather, near the teenager.  The game seemed to be more fun to the boy if the young man had to chase the ball.

One young mother was hesitant about leaving her infant daughter in the nursery.  I overheard Teri tell the worried mom that when she (Teri) brought her daughter to this conference years earlier she had never even left her daughter with her grandparents. Hearing this conversation, I remembered the strong urge to get an occasional moment away from the never-ending responsibilities of being the mom of a baby with special needs.  And, I remembered the equally strong worry that something would happen if I wasn’t with her. In the first year, the only person I eventually left Eliza with was my mother, a retired nurse – after I had checked her references, of course. You can never be too sure.

I got to meet Savannah and her mom, Lacey (Moms on Monday #18 is a loving tribute to a beautiful girl and her dedicated mom).  I got to meet Adam and his parents, Lara and Todd.  (Lara assured me she will be a Mom on Monday someday.  This is in no way a blatant attempt to persuade her to answer those questions I sent her.  Not. At. All.)  These pictures were taken at the end of a long day and both kiddos were ready to go home.  They were very patient to let us take pictures. Adam gave me a very polite High 5. 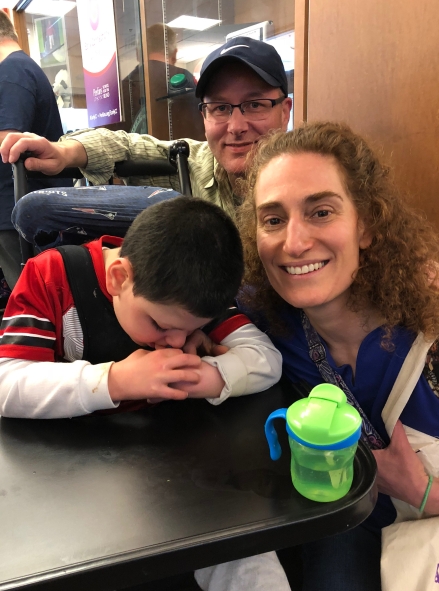 Image: A curly haired girl with glasses in a wheelchair between two smiling women

Image: A dark haired boy, sitting in a chair, leans over the tray of his chair.  His father kneels behind the chair with his arm draped over the back while his mother leans in on the boy’s left.  Both parents are smiling.  And, the mother has promised to be a Mom on Monday.

More to come on the information given and stories shared at Early Connections 2018.

More of Ian Christy’s art can be found at https://www.instagram.com/i.christy/

One thought on “We’ve Got This! / Early Connections Conference 2018”